The Art of Memes and Visual Intelligence

What is visual intelligence?

In modern culture, digital content is more saturated than ever, which is why visual content intelligence skills are used so frequently. Professionals in the media industry use visual intelligence because they can create a vision and perception for their art before it's even tangible.

Any form of art from drawing, and painting to graphic designing and digital creating is related to visual or spatial intelligence in order to build or understand a story. Imagine you are traveling cross country, and decide not to use your machine learning GPS, but instead a paper map. Not only is it important to look at the map as a whole, but to understand and remember the colors, distance measurements, and keys. To understand these map features, it take visual intelligence and spatial intelligence.

Not only can visual intelligence analyze images, but generate, store, transform, and retrieve images. For instance, someone with a photographic memory can implement recognition of an image from their memory and apply that image to a certain context. Another visual intelligence skill is editing a social media post. These observational skills and communication skills listed above are two great visual intelligent solutions.

How is Visual Intelligence Used in Social Media?

For a social media post to survive, it depends on both the social media manager, and their audience’s perception. In the art of social media management, compartmentalizing high visual intelligence images from low ones is a crucial observation skill to possess. When this communication skill is successful, it drives traffic to the site and maintains communication with followers. Managers also have to know their audience and be able to envision if their followers would interact positively with the social post. Social media marketers now use machine learning or artificial intelligence software to track which posts are doing well on what platforms, and why.

One out of many companies that use visual intelligence for their media is the St. Regis Hotel. When looking through all of the St. Regis' Instagram posts, it is apparent that images including water as the main focal point, at a frontal perception have the most engagement. Obviously, a human can distinguish that a pool or ocean is a body of water, but a machine learning tool cannot. Instead, AI uses its visual intelligence to detect colors in the image which is reported as water in the insights. When a social media manager seeks out and analyzes trends on a media platform, they are able to increase their site traffic through the art of perception. Whether a computer or human does it, visual intelligence can detect there is a theme between bodies of water and pop culture in the hospitality industry.

How are Memes the Best Visual Intelligence?

The word meme is actually derived from the Greek word “mimeme”, which means “imitated thing”, similar to the word gene. The words mimeme and gene were then combined to form the groundbreaking word memes. Richard Dawkins’ in his book The Selfish Gene was the first person to implement memes as a legitimate idea. Dawkins’ believed that even through the evolution of an idea in a culture, it could maintain its original meaning throughout generations.

In contrast to a regular image, an internet meme uses twice the context, that in return reaches a larger audience. For example, if an Instagram page posts an internet meme that uses a well- known image in millennial culture, and a text that references an older generation, that meme’s message will reach a larger audience. Memes effectively generate a responsive, wider target audience.

The audience can either have a perception of the image, text, or both within the meme in order to gain some understanding of the overall message. When a meme is posted on a social media platform, that site’s brand experience is heightened for the customer as it takes visual intelligence to relate to the brand’s message. Memes and their visual intelligence they display are more effective, in contrast to a forceful sales pitch, because they evoke emotion. When internet users see relatable memes, without realizing, they drive the meme from content to viral content. 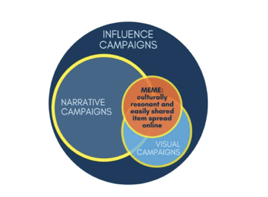 Memes are basically the poster child for social media marketing. They give double the content and context that can relate to more than one group of online communities and can advance their narrative in culture development. Think about it this way, would you rather have an intrusive sales pitch on your social media feed, or a relatable meme you can connect with?

The best way to use rhetoric is through visuals, and the second-best way is through text. Combining these two forms of persuasion through a relatable meme will spark a viral marketing idea and will interest your audience. Memes bring out the visual intelligence in your followers because it evokes meaning and relationships between your audience and your company. This then builds your brand experience for the customer. Social media marketing originates from your visual, so why not enhance your visual intelligence by including memes?

How to Make Your Content Intelligence Application 10x Better