Across the board marketers are seeing a significant decline in Facebook engagements. However, this does not mean it is the end of utilizing Facebook as an important marketing channel. Facebook is working to become more relationship oriented and encourage users to stay more connected with their family and friends. All this means is the interactions that you are supposed to be having now on Facebook is to create more meaningful interactions and engage more with relevant information to the specific user.

Marketers are feeling the heat from their bosses and are having to explain why the social engagements have dropped so much. This is an issue that all marketers are going through because of the huge change in Facebook's algorithm and now are looking for new ways to restore their previous level of engagement. This has led to marketers searching for different ways to make up their loss in social engagement, or at least dampen its effects. This situation is similar to an asset manager and their client, the manager's job is to watch over their clients money and when the market drops the banker will make sure that the client will lose as little money as possible. So right now marketers are looking for new ways to accept their losses but make sure their losses are not as steep.

This is not a new issue

Cortex has compiled data that was collected from our platform since June 2015 where the total level of social engagement with Facebook posts was 5.55 billion and stayed stable until August 2016. Over this time frame however, the number of posts continued to climb, leading to falling engagement rates across the board.

In August 2016 the posts still maintained relatively higher levels of engagement, totaling 5.98 billion. The following month of September engagements dropped to 5.41 billion and this is when the total engagements began to show a more pronounced decline. This data is showing that the overall total level of engagement that marketers are having with their Facebook users has been on a slow decline after the new algorithm has been put into action. 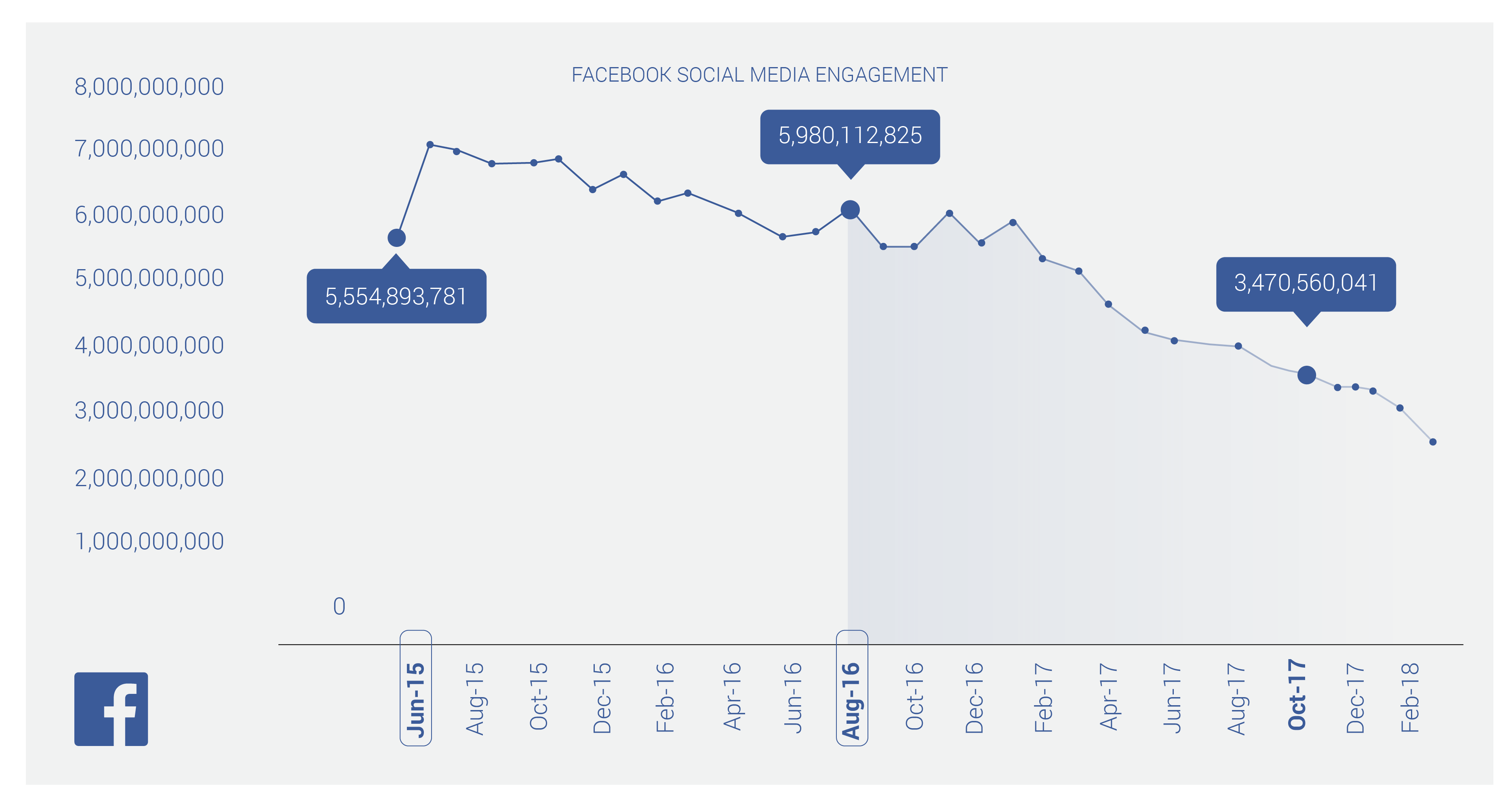 By the next September of 2017, the level of Facebook's total level of social engagements dropped by 42% to 3.62 billion and the numbers did not stop from there. Our latest recording of social engagement with Facebook was in February 2018 where global brand engagements had declined another 33% to 2.44 billion in just 3 months. This is a staggering blow to brands who have invested heavily in Facebook, and the decline shows no signs of slowing down any time soon.

Some companies are still finding ways to be successful

An example of a company that has been successful through investing in understanding their content and audience preferences, St. Regis Hotels & Resorts. They have been able to mitigate the drop in their social engagements. They might have been affected a little from the decline with Facebook but not seen the significant drop offs many brands are experiencing. Over the period of April to October 2017 Facebook engagements dropped 23.88%. However, St. Regis had some of their best months ever, rising 124% and peaking with 198,342 engagements in June. St. Regis noticed the decline and realized that he posts they were making had to attract their audience and make sure they stayed engaged. 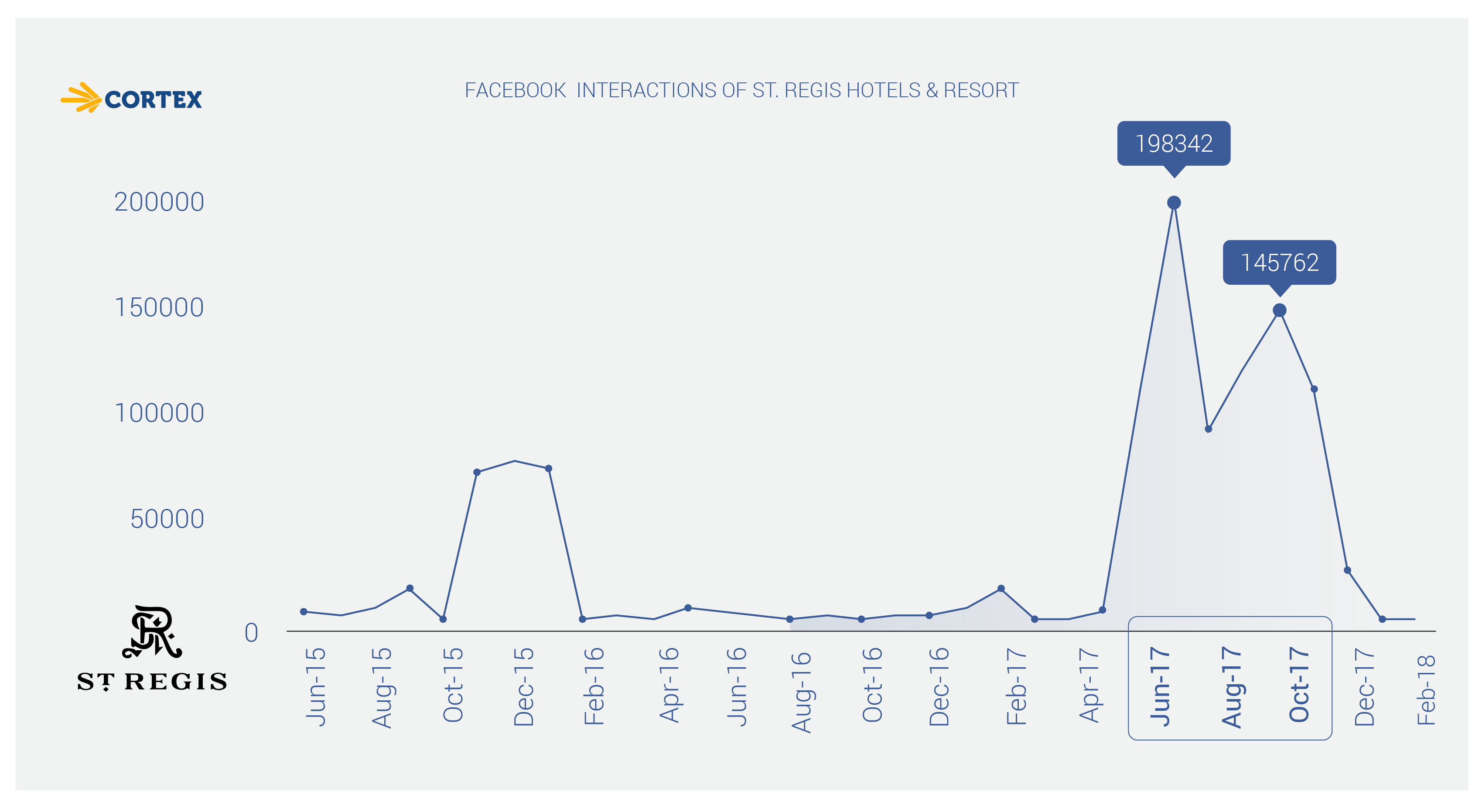 Ways to overcome the decline

A solution to keep your social engagements above the depletion level is to keep on posting and maintaining a consistent schedule. With that strict schedule you will have to make sure the content that is being produced is the most enticing and useful as possible. For your to relate to your audience, you have to understand what your audience relates to. And this goes beyond the relationship between you and your followers. You need to understand their influences as a whole. One of those preferences to understand could be around when they consume content. Gaining insight into this will optimize your posts performance by merely knowing WHEN to post. This will help you deploy to your audience when they're most likely to engage.

Another possible strategy to overcome the downfalls on Facebook is visual content optimization. As many marketers use visual content to engage with users, it is imperative to understand the content preferences of followers. Visual content is some of the more time consuming content to create and potentially requires a team of people working on it. To fully understand visual content, it won't just cut it to count the likes, types of comments, and reactions to pictures. Visual content can be enriched and analyzed through AI and visual intelligence to gain deeper insights into audience preference. Aside from having the best visuals it will also help you write captivating caption that your audience will understand and find more appealing.

These two solutions are some of the ways to maintain strong social engagements with your audience but there are other ways to get your audience's attention. People are going to want to engage with your post and keep up to date with you so it is key to make sure the posts are informative and relevant.

In the upcoming weeks we will be diving more into how to strengthen your social engagement with your audience. Overall Facebook is still a key source for marketing and still has the high potential to grow social engagement, it is just going to require a cohesive strategy and continued optimization.

These Stories on Tips & Knowledge

A/B Testing in Marketing is Dead