Written by John Lahr
October 14, 2018
Since the dawn of time, humans have been sharing stories. It’s a large part of how we communicate ideas and experiences, and how we form the bond of trust between one another.

Virtual reality provides a fully immersive experience. No longer are you an audience experiencing the story from the outside. Immersive storytelling means that you are in many ways cut off from reality and become part of the story.

Through a VR headset like the Oculus Rift, you are transported to a different time, place and experience new situations all in the shoes of a character. Virtual reality is a new version of the same game we have been playing for centuries. The game of storytelling is all inclusive. We are getting rid of the storyteller and letting the audience become the storyteller.

In many ways virtual reality storytelling keeps the same tenets of its traditional counterpart. The key to a good story in any medium is provoking the emotions of your audience. When this is done correctly in VR storytelling we are able to live in real time the ups and downs of the story.

So, how do you do it right?

1. Stick to Your Roots

Remember when I said in many ways’ VR storytelling is similar to traditional storytelling? Yeah that’s this part. The reason age old stories last to be “age old” is because they are doing something right. If you want your VR story to be ageless as well, you should take a hint from the greats and utilize strong characters with realistic human flaws an audience can relate to, create an interesting setting, and develop your plot line in an interesting and engaging way.

Just because there are some similar aspects to the storytelling techniques, doesn't mean that they are the same. The entire virtual reality experience changes the storyteller to viewer dynamic.

Since people can choose where to travel within a space, they in some ways become the storyteller. This means the role of the content creators becomes that of the guide. The challenge then becomes using a scene in a way that the viewer acts in the intended fashion. To do so you must use the technology available to you within the VR environment to your advantage.

The best stories start with a setting that is intriguing and relatable. The setting in virtual reality storytelling is arguably the most important aspect of you story. The setting alone should evoke the feeling of your story. In other words, even before you add in other characters or narrative, the setting should tell you what kind of story you will be going on. This emotional factor is more important than using realism, so focus on ways to imbed symbolic knowledge into your setting.

In a virtual reality story, you have 360 degrees to play use to your advantage. While this offers amazing opportunities to create an expansive setting, it also creates a whole new obstacle, which is that you have no control over where the audience chooses to look. In order to keep the plot line going, it is vital that the audience is moving in the right direction.

That being said, to make it a non-frustrating experience, and to avoid VR motion sickness, most of your story should take place in the 180-degree span in front of the user. The other 180 should primarily be used for expanding the setting.

But even doing this doesn't guarantee a user will be looking at what is taking place in which they are intended. This brings in the importance of using light and sound to your advantage.

Most video games feature a hint option on the easiest setting that shows you with a beam of light the direction you are supposed to be heading. Using light in VR stories would work similarly. By making the direction the audience should be heading the brightest you can keep them facing the area that the story is occurring in.

You can also utilize sound in an innovative way. Sound is powerful in any digital story, but even more so in the VR world. Since 360 sound technology exists, you can add spatial audio cues to tell the audience which way to go. 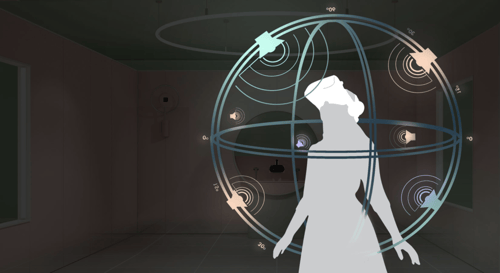 The Concept of Time Within Plot

Another thing to consider when considering the marriage between storytelling and VR is how time is captured within a VR story. How do we show that something is a flashback or happening somewhere else within a virtual world?

Most digital storytelling (and live theatrical storytelling for that matter) use a fade to black to show a “change in scenes”. The problem with doing this in a virtual world is that sitting in 360 degrees of black silence can be a little… disillusioning and break you out of the immersive experience. Thus, when coming up with your plot and having a change in time, choose the transitions carefully.

VR opens up a ton of room for creating believable and artistic characters in the 3D world. Characters in VR are capable of expressing emotions better and doing greater actions than a traditional digital story. On a technical level, creating a VR character is a lot more work than your average digital story.

3. Be on Top of Innovative Thinking

Finally, remember that VR storytelling is relatively new, especially compared to the history of traditional storytelling. Keep an eye on those who are at the forefront of VR like VR studios and 8ninths. To keep up with the ever-changing environment of new technology you need to be prepared to learn from those around you and adapt to innovative thinking.

The best part about technology is the future.